Why We Need Arts Funding in Calgary 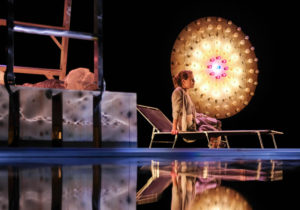 A photo from this season's production of Extremophiles by Georgina Beaty of Downstage Theatre Company. Courtesy Caitlind r.c. Brown

Art isn’t just what we see on the walls in museums and galleries. You see, hear or feel it when walking across the Peace Bridge, or taking a selfie in front of the giant head called Wonderland, or putting your child in piano lessons, or when you spread blankets on the ground at Prince’s Island Park and listen to the artists at Calgary Folk Music Festival. Art is part of our daily life and its benefits to our city are numerous, including contributing to the economy, adding to the vibrancy of the city that draws business, talent and visitors to Calgary, provoking discussion and critical thinking, as well as connecting Calgarians to each other, according to Calgarians who are proposing increased municipal arts funding.

When actor, writer and drama therapist Raffi Minas came to Calgary in October 2017 from Lebanon, the 28-year-old had more than a decade of experience in writing and acting but found he had to start from scratch in Calgary.

“It’s hard to act here because you need to know the language, accent, networking, and the most important side in my opinion, you need to understand the culture,” Minas says.

When a friend sent Minas a poster advertising the Theatre Community Connections for Newcomers Program, which pairs newcomers with past theatre experience to mentors, he was eager to sign up.

The pilot project is a partnership between Downstage, a theatre company that produces Canadian work with a focus on social issues, and the Centre for Newcomers, which provides settlement and integration services to immigrants and refugees. Four participants were paired with mentors to create a five to 10 minute showcase performance.

Minas has written a script with his mentor for a 10-minute performance called Suitcase, the story of a man displaced by war, inspired by his own experiences of fleeing Syria for Lebanon before coming to Canada. The show features a refugee who comes to Canada with nothing but a suitcase. He is stopped for a bag check by a customs officer at the airport, and as he pulls items out of his luggage, he recounts the stories behind them— some funny, some tragic. Minas hopes the audience will have a new perspective about the civil war in Syria.

“We discovered it’s very difficult for newcomers to Canada who have professional experience in theatre to start working in their field,” says Ellen Close, the artistic director of Downstage. Close says there are many theatre jobs that are never listed, since companies often reach into their pool of established actors, designers or playwrights, or find talent through training programs that provide professional connections.

“We’re poorer as a theatre community by not having pathways for newcomers to start working,” Close says. “Our work should reflect the greater diversity of Calgary. The people we’ve connected with will be a tremendous asset to the theatre community and their work will be wonderful for Calgarian audiences to experience.”

While more than 20 newcomers wanted to sign up for the pilot project, they could only accommodate four people. Close is applying for project-based funding to continue the work, which means she doesn’t know what it will look like in the future. “If we had increased operating funding that would go a long way to make those commitments, and allow us to be more responsive to opportunities with partners as they arise,” Close says.

Calgary Arts Development is Calgary’s designated arts development authority that invests and allocates municipal funding. They are requesting an increase in municipal arts grant funding from $6.4 million to $19.5 million over the next four years.

They propose to increase operating investment in not-for-profit arts organizations, increase support to individual artists, and increase the diversity of the arts sector to better reflect Calgary’s demographics.

“We are on the verge of systemic change when it comes to diversification of not only our economy but our identity,” Pon says. “That’s a huge opportunity for those of us who are civic partners to work together and move the city’s identity and brand in a consistent direction where we all see ourselves in that identity — as an arts community I’m not so sure we have.”

They’re also proposing to build on arts development programs through research, engagement, events and more, which includes promoting talent we already have in Calgary to draw visitors. “Calgary is promoted as a gateway to the mountains, which is fantastic, but it shouldn’t be the first thing,” Pon says. “What about Prince’s Island Park and the Calgary Folk Musical Festival, or East Village and the container park, or Studio Bell?”

BANDING TOGETHER TO ADVOCATE FOR ARTS FUNDING

Philanthropists Christine Armstrong and Irfhan Rawji started Creative Calgary, a non-partisan group of citizens, in 2017 to advocate for an increase in municipal arts investment, noting that Calgary lags behind other major cities across Canada when it comes to art funding.

Rawji says due to the downturn in the economy, the corporate sector can no longer support the arts community like it once did.

“We started Creative Calgary because we realized if we didn’t get the sector together to describe that challenge collectively and highlight this gap, it probably wouldn’t get fixed, and put a lot of different companies at risk,” Rawji says.

He says from a business perspective, a vibrant arts and culture scene is key to recruiting knowledge workers.

“The cultural scene is part of what makes a city a great city,” Rawji says. “I’m interested in the arts as an individual and a human — and as a business person, it’s critical if we’re actually going to grow and diversify this economy.”

Rawji adds that in today’s tense political climate, and amidst the growing fear of the “other,” art is critical to bringing people together. “Visual arts or dance is a universal language and has a way of allowing us to share a common experience and bring us together,” Rawji says. “It’s a tool for inclusion and building bridges.”

Both Calgary Arts Development and Creative Calgary urge Calgarians who believe civic investment in the arts is important to reach out to their city councillors, who provide guidance for city administration in the next budget cycle (they are reviewing the 2019-2022 plans and budgets in November 2018).

“If we don’t decide as a city and community of citizens that we think this is important, it will probably disintegrate because it can’t survive under its current funding structure,” Rawji says. “If we decide as a community to support it, we can make it even better.”

156 organizations Calgary Arts Development invests in produce $134 million in value-added GDP to Canada, with the large majority in Alberta

More than 50,000 Calgarians
are employed by the creative industries sector