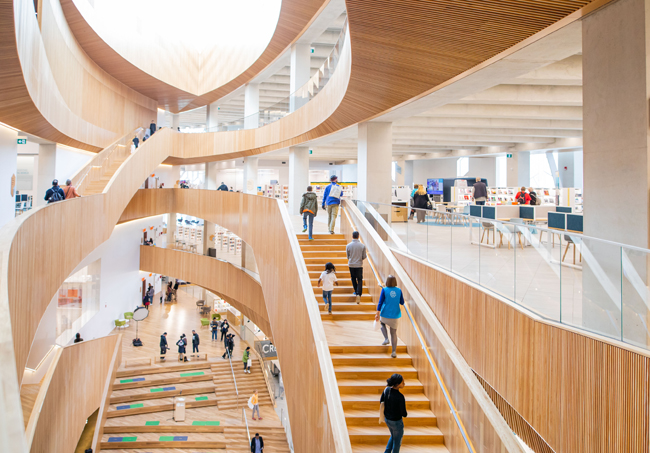 When strolling Calgary’s East Village, it’s impossible to miss the architectural marvel that is the new Central Library. Its doors opened to the public on November 1, 2018, signifying the completion of a much-anticipated project — and for library staff and Calgarians alike, this has been a long time coming.

“When we opened the original Central Library in the mid ‘60s it was deemed too small at opening, so an expansion was added to that library within ten years,” says Mary Kapusta, director of communications for Calgary Public Library. Kapusta says the conversation about needing a new central branch got serious a couple of decades later, but didn’t gather steam until initial funding was committed in 2004.

Now, the new building stands as a landmark and regal gateway to the East Village. The sweeping front steps and large, open atrium make the building feel similar to a sleek art gallery or museum. Created in tandem by Norwegian-American architecture group Snøhetta and Calgary firm Dialog, the library is designed to become quieter as you travel up the circular steps winding under the building’s large oculus-style skylight.

Features include professional editing suites, an interfaith room, an auditorium, a children’s area with built-in play structures, and even an in-house café and restaurant run by the local drugstore Lukes. Amenities aside, the building’s main function is, of course, as a library — a service hub that Michael Brown, president and CEO of the Calgary Municipal Land Corporation (CMLC), says was needed in the inner city.

“For the longest time, Calgary’s history was: you grew up in suburbia and you went to work in the downtown core, and the reason for that is that’s where a lot of the amenities were. What we’ve learned as a community is that’s not necessarily a success,” he says. “We need to get people living in the inner city, but in order (for that to happen), you need to have things for them to do.”

When it comes to communities looking to grow and attract more residents, East Village is among Calgary’s top contenders. Revitalized in recent years with new hotspots like the National Music Centre and the historic Simmons Building, it’s quickly becoming one of Calgary’s most sought-after neighbourhoods.

But, as is common with gentrifying areas, there are many people in East Village experiencing difficult circumstances like poverty and homelessness. Brown acknowledges this, saying that when the CMLC started the campaign to have the library built in the East Village, “There was some thought about ‘Well, you have some drop-in centres, can you get rid of them?’ And our board made a decision that we weren’t going to do that — they are part of our community.”

Mary Kapusta says the library is often asked about its role in helping vulnerable populations, and the answer has always been the same: “We see people that might be going through challenging times in their lives, and the response is that they’re allowed to be here.”

It is often said that libraries are essential pillars of democracy, and, perusing through the new Central Library, that becomes clearer than ever. There are spaces for children, teens, people of different faiths, and those looking for information, a helping hand, or just a quiet place to relax and reflect. As Kapusta says, “When we think about a community hub and accessibility, it’s making sure that there’s something for everyone.”