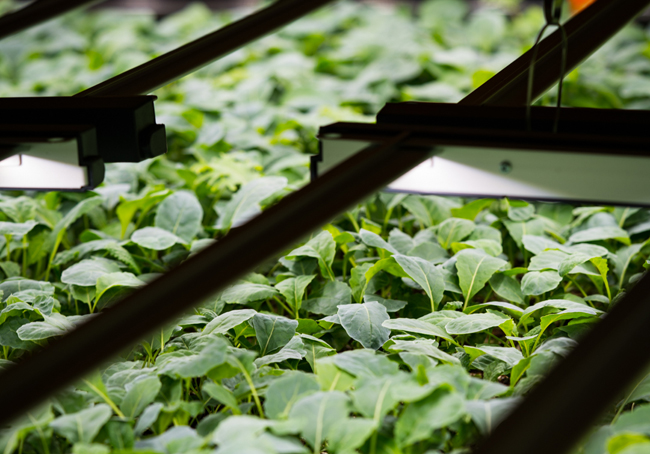 Heavy, humid air greets you like a wall when walking through the threshold of Deepwater Farms’ industrial warehouse — but it’s a comforting barrier, much like walking into a warm hotel lobby after a long, cold day’s travel.

Settled in the Calgary’s southeast, the city’s first and largest aquaponics farm rings with the sounds of flowing water and the buzz of people milling around, inspecting rows of sprouting greens and taking calls from local chefs.

In just over a year, Deepwater Farms has turned this 10,000-square-foot concrete building into a bright urban farm. Melding aquaculture (raising fish) and hydroponics (growing plants without soil), they have created a year-round resource for produce and seafood that can be difficult to obtain fresh in Calgary due to terrain and climate.

The massive warehouse is filled with rows upon rows of fresh greens, growing on top of water and under bright LED lights. The water they float on is also filled with fertilizing nutrients that have been filtered from the tanks where 20,000 deep water sea bass are housed at the other end of the room.

“We know there’s a hunger for locally grown food,” said Paul Shumlich, founder and CEO of Deepwater Farms. “But we don’t have a lot of year-round growers in the area, and no one else is specializing in leafy greens or fish.” 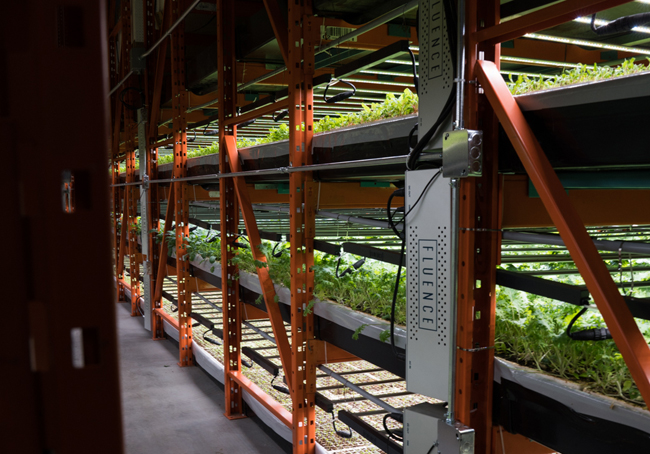 Although Deepwater Farms has been selling consistently since February of 2018, the idea has been a five-year-long labour of love for Shumlich. In 2014 he was window-cleaning to put himself through his entrepreneurship studies at Mount Royal University (MRU), but he knew he wanted to put his time and energy “into something more meaningful.”

“I had literally just stumbled across the subject of aquaponics on the internet,” he continued. “Food production has always been really important to me, and the idea of being able to turn the fish waste into something reusable really spoke to me.”

Joining up with a few other like-minded friends, Shumlich tested the idea out in his backyard as a way to prove to himself that fish and plants can work in harmony. They eventually moved into a greenhouse space at MRU, and then into a garage where Shumlich even lived for a while to keep his eye on the system.

Currently, Deepwater Farms harvests and delivers the matured sea bass and 500 kilograms of kale and arugula every week to farmers’ markets, distributors and restaurants including Una Pizza, Shokunin, Teatro and Model Milk. One of the first restaurants to adopt Deepwater Farms was Hotel Arts’ Yellow Door Bistro, who were already on board before production even began.

“As soon as production started, we started with their baby kale,” said Quinn Staple, executive chef at Hotel Arts Group. “It’s a product that you don’t usually get in Calgary, especially in the winter. You can buy kale or arugula, sure, but it’s generally all from California or Mexico, so they’ve been trimmed for who-knows-how-long before we get it. Then, it comes in this gas bag so when you finally open it, it’s lifeless and flaccid and doesn’t have much flavour. But these (greens from Deepwater Farms) are so fresh and crisp — they have zip.” 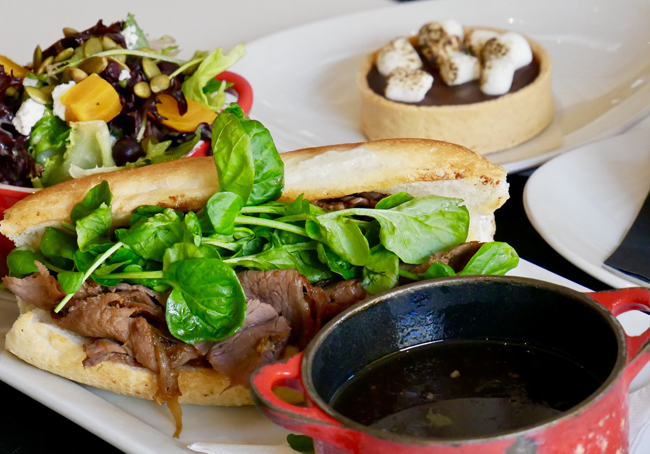 Yellow Door Bistro hasn’t incorporated the sea bass on their menu just yet, but Staple says he plans to bring it in once production ramps up in the coming months. With Alberta being landlocked, and regulations placed on native fish, he said it’s particularly difficult to serve and sell fresh fish in a restaurant, even for abundant northern species like rainbow trout.

“There’s almost no fresh seafood in Alberta,” he said. “We don’t have that luxury. And so for us to say that we have a nice, local product? That’s something we can stand behind.”

The sea bass are imported as “fingerlings” (juvenile fish) from Australia, and raised in enormous tanks inside of Deepwater Farms. Each tank houses fish at different ages and sizes as they mature, usually reaching the sellable weight of one or two pounds after 10 months.

The tanks are all self-cleaning and drain the waste into a filter to break it down into ions and minerals for fertilizer. Aquaculture manager Ben Matthews says they completely use all of the waste, so they never need to use artificial fertilizer or soil for their produce.

“It’s a very sustainable system, and our fish are certified Ocean Wise,” said Matthews. “Most fish you eat in Alberta is not killed on the same day you eat it, but that’s how we want to be different: we want to be fresh.”

Despite already being the first and largest commercial aquaponics facility in Calgary, Shumlich says he plans to at least double production by the end of 2019. They don’t want to grow too fast, he cautioned, saying that maintaining their high quality is their strength, but they still want to be disruptive and get their products out on a massive scale.

“It’s been five years, so this didn’t happen overnight,” Shumlich continued. “But we’ve come a long way and we’re always looking forward to a better future.”

He still describes Deepwater Farms as a prototype, because they continue to redesign their system and keep making it better — he even calls their water and waste fertilization system their “secret recipe.” And, as the province is looking to diversify, Shumlich said he wanted to take the opportunity to help provide job opportunities in science, technology, engineering and mathematics. He knows Calgarians crave local food, and although it was a challenge to find a way to keep producing greens year-round in a city where snow can fall any time between September and May, he and his team were determined to find a way.

“‘Organic’ is a label, but ‘local’ is a position,” he said. “You can’t fake local, and it implies that it’s farmed and raised ethically and responsibly. You want to know the person who’s growing it, and you want to support them. That’s what we’re building here.”