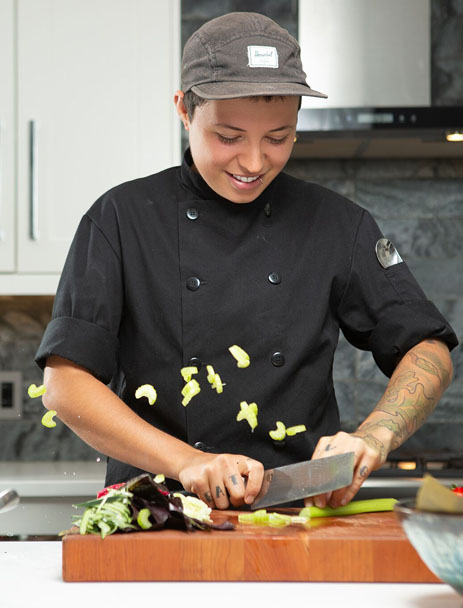 When they were 19, Lexx Ambrose decided they wanted to be a chef. They became fascinated by the skills of their roommate who was a cook at a restaurant at that time. Since they were raised in an artist-forward family, they decided to turn creativity into a career. Ambrose became a vegan more than five years ago while they were a sous chef at the mainly meat-based Cactus Club Cafe in Vancouver. For a year, they were struggling to decide why they continued to work in an environment that didn't align with their values anymore. Eventually, they became a head chef at Zend Conscious Lounge in Vancouver. After taking a leap of faith, they moved to Calgary to help open an entirely vegan brunch spot — The Dandelion in Ramsay. They were lucky to be at the point in their career where they had the ability to specialize in a more niche market such as vegan food. Now, Ambrose is a freelance vegan chef with their own company Plant Plate, catering for retreats and private events, organizing workshops and much more.

What is your favourite vegetarian/vegan place to go to in YYC? Why?

This is such a hard question to narrow down because so many places offer so many different great ideas involving food. However, Raw Eatery and Market in Kensington hits the top of places I’ve been back to the most. When you invest in a meal, you invest in who makes it and I truly believe you can taste intention and love. I have never eaten something from Raw that wasn’t jam-packed full of love, the owners live and breathe that place including choosing to truly care about their business and the people who come in which is huge for me when deciding where I choose to spend my money.

How do you perceive the vegan/vegetarian scene in Calgary? Do businesses respond to this trend and is there enough to choose from?

Calgary is starting to come up for sure, in the past four years alone it’s incredible to see everything that has popped up and what is coming to our city soon — such as a vegan butcher shop called Charcuterie that has taken social media by storm with local excitement. Calgary responds very well to vegan and veg business ventures, I have watched all walks of life embrace the food scene with open arms and come back time and time again. It’s very cool to be a part of that support and watch a city like Calgary become more open. As for is there enough to choose from? Never enough! Calgary is so vast in geography that it would take an entire economy of vegan food to even scratch the surface of our city. Vancouver is half the land size and outnumbers us with vegan food by the hundreds. Every corner you turn you can find something, whereas here we are still in the phase of having to plan destinations in order to eat veg luxury.

What are some of the ways the culinary scene in Calgary could improve in regard to a vegetarian and vegan diet?

Calgary needs more innovation, we have lots of comfort food, which is wonderful, especially since our city is more winter than city and comfort food may be the only thing that keeps people here — kidding of course. But we need places offering experiences that blow people away with culinary skills. Maybe our economy isn’t in a place to sustain that kind of business yet but I have a feeling it will come. I say this with confidence because of future plans I have myself and hopefully others are out there thinking the same thing and are just waiting for the right time to do so.

Where would you recommend getting vegan ingredients that are a bit harder to get in the city?

Most people venturing into the vegan cooking world can actually find anything you would cook within any grocery store you walk into, however for those wanting to challenge themselves to make more elaborate recipes I would say Bulk Barn is a good place to start for things such as vital wheat gluten, nutritional yeast, or egg replacing ingredients such as flax. To achieve tricks like egg taste in food you’ll need to add kala namak black salt to your spice cupboard, it has a very sulphuric taste and smell which adds to the overall flavour and that can be found at The Silk Road Spice Merchant in Inglewood, which I highly recommend everyone check out because it’s a chef’s candy shop. Lastly, I would say Community Natural Foods has a vast selection of other ingredients you won't find in a typical grocery store.

You are a freelance vegan chef with Plant Plate. Where can people see you in action?

To see me in action you’d have to summon me to work with you or for you. I offer meal prep services, private workshops, private chef experiences, retreats, catering, you name it and I probably do it on some level. If you follow me on social media you might catch announcements for pop-up dinners in collaboration with other businesses, but if you’re the type of person who doesn’t like to plan anything and only gets involved in experiences on a whim, we’ll never cross paths because I’m not situated in an open environment that is shared with the general public. So if anyone out there wants to connect, find me online and do so — I’m all about social connections, even if I don’t feed you and you just want to talk food, I’ll be into it.

If you had to eat only one meal for the rest of your life, which one would it be and why?

This is surprisingly easy to answer. Pancakes. And why? Because pancakes have never let me down. I have never had a plate of pancakes and experienced disappointment. So why risk eating one thing forever if I’ve been disappointed by it in the past? Eat smart, eat pancakes.